“……it turns out to be the perfect operatic subject: squalid and earthbound yet imbued with a radiant, almost mythic quality……At the start of what one hopes will be long operatic career, Simpson has pulled off a genuine coup: a glimpse of the numinal within sight of the urinal.”

“With a sterling cast led by Lesley Garrett – powerfully eloquent, suppressing her natural glamour and embracing dowdiness – and Steven Page brilliant as a cynical drag queen, all angles and bones and bling and slap, it has the makings of a hit.”

“Don’t be misled by the title. Though just 75 minutes long, this gripping new opera is a potent cocktail of incident and emotion – but far more about pain than pleasure…Though written for just ten instrumentalists, the score is virtuosically varied, with the strings generating tenderness or lyrical fervour in contrast to the predominantly churning, dark-hued wind writing. Although there is no direct pastiche of club music, Simpson slips in enough hints of techno to suggest the hedonist escapism of the dance floor we never see”

“In the end it’s the ordinariness of the story, its realness, which sets it apart from the expected. But then Liverpool audiences do like to be surprised. Shouts of ‘bravo’ and an enthusiastic ovation for the artists and Pleasure’s creators showed that.”

“Simpson’s music was the star of the show… with a score so full of riches that it is impossible to list them all. Firstly though, his grateful vocal lines are beautifully written, challenging the singers in all the right ways to emphasise the drama. There was a wealth of memorable melodic material that never strayed into ‘musicals’ territory, even in the drag queen’s torch songs. His small scale ensembles of ten players, the talented Psappha conducted by Nicholas Kok, were given material of infinite variety and subtlety. Every nuance of the drama was heightened by the accompaniment and never distracted us from it.”

“The very first instrumental notes are dark and sombre, and they prepare us for a scenario which is essentially disturbing and, for two of the four characters, ultimately tragic… Psappha brought out the great variety of colours and textures in Simpson’s brilliant score. Pleasure makes a powerful impact…”
The Independent

“One could argue such a tragedy hardly suits the name Pleasure, but this encapsulates Simpson’s opera perfectly. It is an opera caught in contrasts, celebrating the progressive nature of Opera North and modern society by its mere conception while also shedding light on the struggles of not only the LGBT community, but also all minorities in a patriarchal system. Challenger wanted to write an opera that would make someone “fall in love with opera for the first time” and, in my case, this was certainly achieved.” 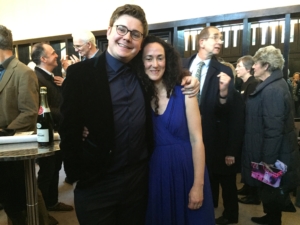 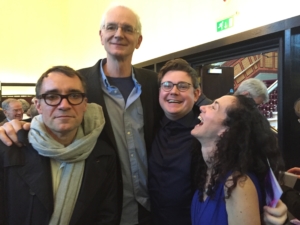 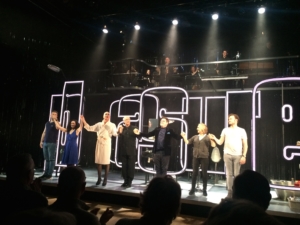